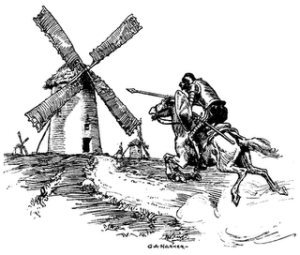 The notion that America should, in President Clinton’s words, help “create a just, peaceful and evermore democratic world” largely determines the thrust of U.S. foreign policy today, including, for instance, the belief that the United States must assist in “democratizing” Russia. While this conviction is often embraced as a moral imperative, it may lead us to moral disaster.

Many believe that, with the end of the Cold War, the United States has the opportunity and the responsibility to create a world order shaped by American power and values. During his election campaign, the president echoed this sentiment, insisting that “there is still great work to be done in the world.” He urged America to build an international community in which democratic norms and free-market economies could flourish by leading “a global alliance as united and steadfast” as that which defeated communism. This grandiose vision unites many, including such an unlikely pair as former President Nixon and President Clinton, in the belief that we must proffer Russia our financial assistance and political and economic tutelage to develop and sustain democracy and free markets in that country.

Those who oppose this vision of America’s role in the world often argue that promoting political and economic change in other countries and exporting American values are not practical goals of foreign policy, which should instead concentrate on the defense of concrete national interests. This opposition must go further. There are, in fact, moral hazards in attempting to effect a new world order.

There is a redemptive quality to America’s self-described role in the world. The United States, Mr. Clinton asserts, has a “particular contribution to make in the march of human progress.” America, he says, cannot conduct its foreign policy as if it were “simply another great power,” for the U.S. regards itself as a model for mankind. Assuming that people everywhere share America’s fundamental ambitions and values, we perceive it as our duty to help them become like ourselves.

This attitude dangerously distorts our understanding of and relations with others. For example, across the political spectrum, most American thinking about Russia today is based on the premise that the United States, like a missionary, can and should help convert Russia into what amounts to a replica of America. Americans believe that they can exorcise the demons apparently ready to possess Russia by providing financial assistance and, in the president’s words, by teaching the “skills, values and culture of free society.” But of all Russia’s possibilities, Americanization is not one. Russia’s current crisis is not primarily the result of nefarious political intentions, nor of a poor understanding of free markets and democracy, nor of baneful “hard line” influences, but of deeply rooted traditions and intractable circumstances that are distinctly Russian. Trying to make Russia into another America is bound to embitter both parties.

America’s missionary impulse-the conviction that it is our obligation to inflict our conscience upon the world because there are no enlightened alternatives to American ways-breeds within us an intolerance and a narrowness. To believe, for instance, that Russia’s fate is in the West’s hands, is to indulge in a paternalism that reduces other people to wayward children to be cajoled and converted until they conform to our image. This cannot help but engender within us a reckless and cruel pride.

The ethic of conscience is intrinsically insidious. Once we make others the objects of our generous wishes, we inevitably make them the objects of our pity, and ultimately of our coercion. While America may see itself, like Kurtz in Conrad’s “Heart of Darkness,” as “an emissary of pity and progress,” this role will ultimately lead to our forcing others into the procrustean bed of America’s image, brutalizing all concerned.

President Clinton has said that America has an obligation “to give back to a contentious world some of the lessons we learned during our own democratic voyage.” But if we seek to teach the world by imposing our achievements on it, we have learned the wrong lesson from that journey. As we view what promises to be a tumultuous post-Cold War world, it is important to remember that our nation, too, was forged in blood and iron, that our own struggle to build a more perfect union and effect democracy has been marked by tragedy, aggression and brutality, and that we have not yet reached our destination. For better or worse, without these trials, we would not be the nation we are today.