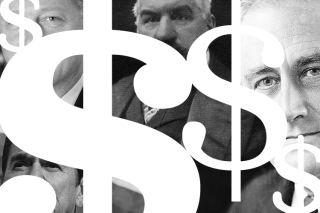 For five years, pundits and foreign-policy officials have been trying to refashion America’s global role for the post-Cold War era. But for all their talk about the need to articulate a bold new vision, their assessments all rest on the status quo, what National Security Adviser Anthony Lake calls the “imperative of continued U.S. world leadership.”

This imperative dictates a specific, complex–and familiar–global role for the United States. While there are differences over what former Secretary of State James Baker called “second order questions,” like humanitarian intervention in Somalia or Haiti, there is agreement on America’s fundamental world role: It must be maintained. And this requires that the essential features of what is called America’s Cold War foreign policy–U.S. leadership of NATO and our East Asian alliances and U.S. guardianship of our allies’ access to Persian Gulf oil, for instance–remain inviolate.

To assume that the Cold War’s end allows for a sweeping reassessment of America’s global role is to distort the underlying aims of and challenges to that role. What we think of as the Cold War was merely instrumental in America’s larger strategy. As Sen. Arthur Vandenberg said in 1949, in “scaring hell out of the American people,” the U.S.-Soviet rivalry helped secure domestic support for Washington’s ambition to create a U.S.-dominated world order. Such a world order would allow for what had never before existed and what U.S. policy-makers believed necessary for American prosperity: a global capitalist economy.

Since the late 1940s, U.S. foreign policy has attempted to reconcile the inherent contradiction between capitalism and international politics. Capitalist economies prosper most when labor, technology and capital are fluid and mobile, so they are naturally driven toward international integration and interdependence.

Thus in the normal course of world politics, international economic interdependence is impossible to achieve. In fact, international capitalism has enjoyed only two golden ages: the periods following the Napoleonic wars and World War II. What made these episodes of peace and prosperity possible was the ability and will of a single state to become a hegemonic power, taking care of other states’ security problems for them so that they need not pursue destabilizing policies or form trading blocs in attempts to improve their relative positions.

This suspension of international politics through hegemony has been the fundamental aim of American foreign policy since the late 1940s. The real story of that policy is not the thwarting of and triumph over the Soviet “threat,” but the successful effort to impose a specific economic vision on a recalcitrant world.

So even though the Cold War has ended, America’s security “leadership,” as exercised, for instance, in its dominance of NATO and the U.S.-Japan alliance, is still considered necessary to hold in check the rivalries that would otherwise disrupt the stability that international economic interdependence requires. As the Pentagon’s 1992 draft defense planning guide argues, the United States must continue to dominate the international system by “discouraging the advanced industrialized nations from challenging our leadership or even aspiring to a larger global or regional role.” Assuming this awesome responsibility, the Pentagon asserts, ensures “a market-oriented zone of peace and prosperity that encompasses more than two-thirds of the world’s economy.”

Imposing this protectorate over two-thirds of the world economy means not only that the United States must dominate wealthy and technologically sophisticated states–our “allies”–but also that it must deal with such nuisances as Saddam Hussein and Kim Jong Il so that potential great powers need not acquire the means to deal with those problems themselves. This, in turn, dictates that America must spend more on national security than the rest of the world combined.

Former Defense Secretary Dick Cheney’s recent assertion that “it’s a myth that other nations can take over the United States’ traditional role in global security . . . there isn’t anybody else to do it” springs less from an overbearing chauvinism than from a recognition that what many regard as the highest stage of capitalism–today’s complex web of global trade, production and finance–is in fact a fragile blossom, sustained by American hegemony. If America were to relinquish its “global leadership” (so this thinking goes), the capitalist order would shatter, with disastrous consequences.

America’s Cold War foreign policy, then, is truly a permanent burden. According to the logic that drives this policy, America has the wolf of international politics by the ears; how could it ever let go? Arguing in 1993 for the maintenance of America’s Cold War alliances, a high-ranking Pentagon official asked, “If we pull out, who knows what nervousness will result?” The problem, of course, is that we can never know, so, according to this logic, we must always stay.