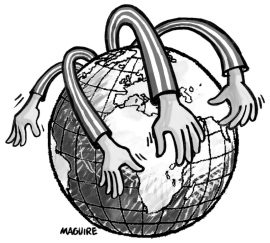 Exporting “democratic values,” specifically the tolerance and pluralism that we regard as central to the American creed, has long been an avowed aim of American foreign policy. Today, our democratic values and supposed heritage of ethnic diversity and civic comity are touted as the solution to the world’s civil wars, the Bosnias and the Chechnyas, that have proliferated in the post-Cold War world.

“Can’t you all get along, just as we do over here?,” U.S. statesmen and foreign-policy mandarins smugly ask fragmented societies. They urge these societies to play nice: to elevate tolerance and unity above ethnic nationalist or religious domination as their organizing principles. But these ideas about settling internal conflicts are fundamentally distorted by their proponents’ idealized view of America’s own history and development.

The U.S. foreign policy community displays America as a highly successful model of a multi-ethnic, multicultural, multireligious and polyglot society. But from the time of its settling and until the 1960s, the United States has been characterized by dominance, not tolerance. In 1916, for instance, after waves of immigrants had inundated the United States, the liberal critic Randolph Bourne bewailed a “melting pot” under one aegis: “English snobberies, English religion, English literary styles, English literary reverences and canons, English ethics, English superiorities.” An elite composed of Americans of Anglo-Saxon descent, Bourne recognized, was “guilty of just what every dominant race is guilty of in every European country: the imposition of its own culture upon the minority peoples.”

Ironically, the ideal of the melting pot, which today’s foreign policy experts recommend to the riven polities of the post-Cold War world, originally celebrated not tolerance and diversity but conformity to a narrow conception of American nationality. The melting pot pageants of the early 20th Century depicted strangely attired foreigners stepping into a huge pot and emerging as immaculate, well-dressed, accent-free “American-looking” Americans–that is, Anglo-Americans. Americanization, then, although it did not cleanse the U.S. of its ethnic minorities, cleansed its minorities of their ethnicity.

Thus, the “unity” of the American people was derived not from their warm accommodation to nationalist, ethnic and linguistic differences but from the willingness of an Anglo elite to stamp its image on other peoples coming to this country. That elite’s religious and political principles, its customs and social relations, its standards of taste and morality, were for 300 years America’s, and in basic ways they still are, despite our celebration of “diversity.”

Whatever freedom from ethnic and nationalist conflict this country has enjoyed (and it has been considerably less than our national mythology would have us believe) has existed thanks to a cultural and ethnic predominance that would not tolerate conflict nor confusion regarding the national identity. For better or worse, the current fragmentation and directionlessness of American society is the result of a disintegrating elite’s increasing inability or unwillingness to impose its hegemony on society as a whole.

Furthermore, before Americans cast stones at aggrandizing Serbians or “imperialist” Russians, they should realize that America did not simply evolve; it was made by those who claimed it fiercely and rendered it in their image. Similar to other countries, the U.S. was built by conquest and force, not by conciliation and compromise.

This meant, of course, taking land that belonged to others and subjecting foreign peoples to American rule, a process culminating in the Mexican War, in which a democratic United States swallowed present- day Texas, California, New Mexico, Arizona, Nevada, Utah and parts of Colorado and Wyoming.

Building America also required nearly 300 years of genocidal wars against Native Americans. These wars, one of the longest series of ethnic conflicts in modern history, were resolved not by power-sharing or the other “reasonable” solutions recommended by today’s foreign policy experts, but by obliteration.

In decrying the merciless use of force in Bosnia and Chechnya, Americans seems not to realize that their own Civil War was no different. The United States nearly destroyed itself in the central episode of its national-building–a brutal and irreconcilable nationalist-separatist conflict in which one vision of America crushed another. Although the Constitution–like many of the means lauded by foreign policy

analysts today to forestall civil conflicts–attempted to equalize sectional difference by guaranteeing the South a disproportionate voice in national politics, this could not work in the long run for the United States. As the North’s power and ambitions grew, it was unwilling to abide by arrangements based on an obsolete calculus of relative strength.Meanwhile, the South wanted to determine its own future without being subordinate to or dependent on an opposing, and increasingly threatening, ideology and political economy.

In the end, the North’s vision–of a powerful centralized state, a “Yankee Leviathan,” deemed necessary for capitalist development– emerged as the nation’s. This vision, despite a persistent mythology promulgated by the victors, was triumphant not because it was intellectually or morally superior but because the North won a test of physical strength.

to these conflicts. But the history we hold up as a light to nations is a sanctimonious tissue of myth and self-infatuation.

Taken without illusion, our national experience gives us no right to preach–but it should prepare us to understand the brutal realities or nation-building, at home and abroad. Before we export our myth, we had best recognize that we have not yet found “reasonable” solutions here, and that perhaps such solutions cannot be found.