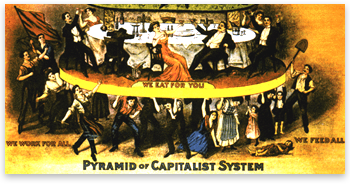 With the wealthiest 20 percent of households receiving a greater and greater share of national income, American society is more unequal now than it was 25 years ago. But contrary to commentators’ warnings of an unprecedented income gap, this does not mean that the United States is becoming profoundly unequal and rigidly stratified. It cannot become economically unequal — because it has always been so.

The current trend toward greater economic inequality represents not a departure from, but an intensification of, historical conditions. This is not to argue that we should be complacent about the rise in economic inequality, but a deeper historical perspective could help Americans think more precisely about what that trend threatens and what levels of inequality are intolerable.

Americans have always quoted with self-satisfaction Alexis de Tocqueville’s observation of “the equality of conditions” in the United States. Yet in 1828, five years before Tocqueville visited the United States, the richest 4 percent of New Yorkers owned about 63 percent of all (corporate and noncorporate) wealth in New York City, and by 1845, its share had increased to about 81 percent.

And although a larger portion of the population acquired a greater share of the wealth in the 20th century, by 1962 the pattern was still far from equitable: the richest 20 percent of households owned 76 percent of the wealth, and the top 5 percent owned 50 percent.

Income has always been more equitably distributed than wealth but has nevertheless been radically unequal. Reliable figures for income distribution go back only to 1910, when the richest 20 percent of American households received 46.2 percent of national personal income and the top 10 percent had a larger income than the bottom 50 percent. Despite year-to-year fluctuations, this division remained remarkably constant over the next 60 years.

The situation that Herbert Croly described in 1909 as “the morally and socially undesirable distribution of wealth” remained essentially unchanged even in the 1950’s and 60’s, a period that today is recalled as a golden age of economic equality. (The poorest fifth of households fared somewhat worse — their portion of income having fallen from 8.3 percent in 1910 to 4 percent in 1959. The antipoverty programs of the 1960’s raised the poor’s share, but it is still smaller than it was in the period 1910 to 1929.)

By recognizing that the inequities in our class structure are deeply rooted, Americans can have no illusions that various current reformist proposals, from retraining workers to strengthening unions, will fundamentally alter those inequalities. Behind these solutions is the belief that growing inequality can be reversed by government programs. Yet this belief is largely belied by data showing an increase in inequality throughout the industrialized world.

The increasing economic inequality is not what is most troubling today. Rather two distinct aspects of this trend are alarming: the small rise in the income of the middle fifth of American households over the past 25 years (compared with the quarter century after World War II) and the actual decline in wages and household incomes of those below the median. The middle class, therefore, is not benefiting from growth to the degree that many commentators believe it deserves to, and the poorest 45 percent of households are not benefiting at all.

Moreover, to characterize the inequality question in terms of the “shrinking middle class” is misleading. The real phenomenon is the shrinking of a working class able to afford a middle-class standard of living. Years before talk began of greedy multinational corporations sending high-paying jobs overseas, blue-collar labor had declined as a percentage of the work force, from 60 percent in 1940 to 40 percent in 1965.

Between 1940 and 1962, the number of low-paid clerical and sales workers had risen more than twice as fast as the number of workers in the manufacturing sector. The era of high-paying jobs for low-skilled workers was over almost as soon as it began.

Furthermore, technology and the re-engineered workplace have not only eliminated the need for many crucial low-skilled, blue-collar jobs, they have also eliminated the need for what could be called low-skill, white-collar jobs — secretaries and middle managers. If high-paying, low-skill jobs cannot be revived, inequality will not decline unless America produces fewer unskilled workers.

As Labor Secretary Robert Reich has been asserting for years, the vast majority of workers could theoretically be better educated to meet the world’s growing demand for skilled labor. In practice, this is unlikely to happen, since, according to generally accepted estimates, an effective education and training program would cost more than $170 billion a year. This would require in essence a substantial redistribution of wealth, in the form of taxation, from those who profit from the economy to those who do not.

Such a revolution from the top down, however desirable, looks most unlikely in the current political climate. Even if the resources could be mustered for a national effort to train the unskilled, many would still be unable to perform skilled work. The avenues to a comfortable, if modest, living for those with modest abilities are all but closed.

The central economic fact of the past quarter century is that the very forces — technological change, flexible production, globalization — that have enriched America’s most educated and powerful have actually hurt nearly 45 percent of its citizens.

The rise of merchant capitalism in the first half of the 19th century, the triumph of industrialization in the second half and the consolidation of the national economy in the early 1900’s both worsened economic inequality and brought general economic benefits. America’s post-industrial economy, on the other hand, has created a society at war with itself, in that one class dreads the very developments the other class embraces.

Until now, social welfare programs have smoothed the rough edges of a system that indisputably (albeit unequally) benefited all classes. But now that the system itself no longer operates in the interests of all parties, measures that make no essential changes to that system will not have the same effect.

If Americans want what they have never had — the kind of equality Tocqueville described — then they should recognize that only radical measures can bring it about. A more modest goal would be to restore the link between economic growth and general prosperity. For all its limitations, the kind of education and training advocated by Robert Reich to produce more high-skilled workers is probably the best approach to achieving this.

For now, the $170 billion price tag makes such a program politically impossible. Someday, however, a glimpse of the alternative — a society that unravels because half its citizens are at best demoralized and at worst enraged — may convince us that it is not such a high price to pay after all.
_____________________
Scroll down within the embedded article. To read in full screen, click on the full screen icon in the lower right corner of the embedded article:

View this document on Scribd