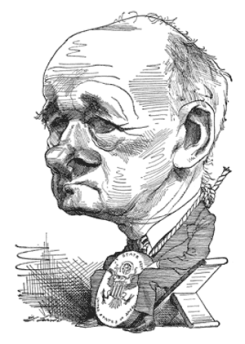 Advocates of US intervention in the Balkans label their critics with the dreaded “I” word – isolationist. It’s the latest in a trend started four years ago, when President Clinton’s then National Security Adviser Anthony Lake branded those who objected to US globalism “neo-know-nothing-isolationists.” Such name-calling squelches reasoned debate and mischaracterizes a view many of America’s wisest thinkers embraced.

First, it’s important to define what neo-isolationism is not. That vocal sector of the Republican right, which holds that the UN presents a challenge to US sovereignty, is hardly “neo-isolationist.” These Republicans, like the foreign policy establishment of both political parties, believe the US must continue to dominate international politics. Their view is therefore triumphalist; and in its chauvinistic assertion of US power is the opposite of a neo-isolationist perspective.

Neo-isolationism is characterized not by arrogant unilateralism, but by a sense of modesty. Mr. Clinton, the Republican leadership, and foreign policy mandarins assert that if the US is to be engaged in the world, it must lead the world. But neo-isolationists believe America can be engaged in world affairs without attempting to dominate them. While Clinton holds that the focus of foreign policy should be conversion of the globe to America’s economic and political system, neo-isolationists resist making ourselves at home in the world by transforming it into America writ large. And while the foreign policy establishment argues that European security must be dominated by a superpower across the Atlantic, neo-isolationists hold that America’s imperial role in Europe demoralizes Europeans and engenders an arrogant paternalism within ourselves.

Neo-isolationism is based on a grand tradition that embraces not only the views of left-wing foreign policy critics, but also a strain of thoughtful conservatism going back to John Quincy Adams. Adams admonished America to go “not abroad in search of monsters to destroy” for in so doing “the fundamental maxims of her policy would insensibly change from liberty to force; she might become dictatress of the world, she would no longer be the ruler of her own spirit.”

Another conservative, the diplomat George Kennan, contradicts the policy of democratic and capitalist “enlargement” advocated by both political parties: “Our own national interest is all that we are capable of knowing and understanding. If our own purposes and undertakings here at home are decent ones unsullied by arrogance or hostility toward other people or delusions of superiority, then the pursuit of our national interest can never fail to be conducive to a better world.”

In castigating neo-isolationism, Clinton has invoked Richard Nixon, arguing that “if we are to be strong at home and lead abroad, we must overcome a dangerous and growing temptation to focus solely on the problems here in America.”

He’d have served the nation better had he echoed his mentor, the late Sen. William Fulbright who decried America’s “arrogance of power.” Fulbright shunned the grandiose temptation to convert the world and argued instead that “we have the opportunity to serve as an example to the world by the way in which we run our society.”

The same charges of “neo-isolationism” hurled at critics of US intervention in the Balkans were also flung at Fulbright, Kennan, and others who criticized US intervention in Vietnam. During the Vietnam War, journalist Walter Lippmann declared the US should “eschew the theory of a global and universal duty which not only commits it to unending wars of intervention but intoxicates its thinking with the illusion that it is a crusader for righteousness.” He was accused by pro-war members of the foreign policy cognoscenti of being a “neo-isolationist.”

Clinton and the foreign policy establishment would do well to heed Lipmann’s reply: “Neo-isolationism is the direct product of foolish globalism. Compared to people who thought they could run the universe, or at least the globe, I am a neo-isolationist and proud of it.”