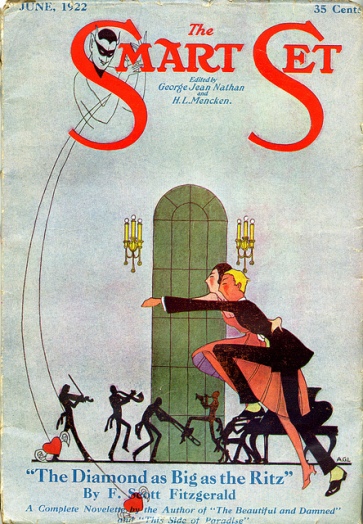 This exuberant collection of H. L. Mencken’s reviews and short essays—most of them previously unassembled—will agitate, annoy, and thrill any thoughtful reader. Though the bulk of these literary pieces were written from 1910 to 1930, Mencken remains a breathtaking, beguiling critic, and—along with Edmund Wilson, probably Gore Vidal, and possibly John Updike—one of the few twentieth-century American men of letters whose reviews will be read throughout this century (as Mencken wrote of Huckleberry Finn) “not as a solemn duty, but for the honest love of it, and over and over again.” Mencken could be exasperatingly wrong (see, for instance, his complete misreading of The Age of Innocence), but even then it is delightful to read so intelligent and honest a writer at work. Although this will (I hope) be the only occasion when these two figures find themselves in the same review, Theodor Adorno wrote that “luck and play” were essential to the essay, and Mencken’s pieces gathered here bear this out. One can follow Mencken as he finds his way to his ideas, open-mindedly but never tentatively, until the essays gel. Mencken’s views on the novel are so elegant and commonsensical that it’s no wonder they’ve been ignored by the bulk of practitioners and critics: “What are the hallmarks of a competent writer of fiction?” he asked. “The first, it seems to me, is that he should be immensely interested in human beings, and have an eye sharp enough to see into them, and a hand clever enough to draw them as they are. The second is that he should be able to set them in imaginary situations which display the contents of their psyches effectively, and so carry his reader swiftly and pleasantly from point to point of what is called a good story.” Mencken attributed these qualities to Ring Lardner, and if for no other reason, this collection should be read for Mencken’s advocacy and assessment of that author, who remains an underappreciated and (as Mencken prophesied) misunderstood American genius. Too often Lardner is relegated to the ranks of humorists, but a discerning reader will find in his work “satire of the most acid and appalling sort—satire wholly removed, like Swift’s before it, from the least weakness of amiability, or even pity.” Mencken grasped that Lardner’s achievement was “to take familiar personages, usually regarded with tolerant smiles, and to show the viciousness under their superficial imbecility.” This seems a stark vision for a master of fiction, but as Mencken rightly argued (see, for instance, his review of My Antonia), a novelist’s role isn’t to provide uplift, impart lessons, explicate ideas, or advance causes. Mencken was above all a stylist; his writing—rollicking and exact—demonstrates more than any other American critic’s a perfect conformity of style and ideas. And given that he is mistakenly, or at least simplistically, regarded as a champion of social realism, his pieces here (especially his assessments of F. Scott Fitzgerald and James Branch Cabell) stand out for their refreshing attention to aesthetics and for an old-fashioned devotion to formalism. As he wrote in his review of The Great Gatsby, “There are pages so artfully contrived that one can no more imagine improvising them than one can imagine improvising a fugue. They are full of little delicacies, charming turns of phrase, penetrating second thoughts. In other words, they are easy and excellent reading.” Being devoted exclusively to Mencken’s criticism of American authors, this collection unavoidably gives the casual reader a distorted sense of his critical oeuvre. Mencken had an intense interest in and devotion to German literature and philosophy, and wrote astutely and at length about nearly every important English and European writer of his day. Moreover, the pieces in this book are in large part the briefest and most ephemeral of his critical work; he collected his most considered essays in A Book of Prefaces and in his six-volume series, Prejudices. And the 1968 collection H. L. Mencken’s Smart Set Criticism, which contains primarily short reviews, gives the reader a better sense of his staggering range and curiosity. (Both volumes include Mencken’s review of Main Street, which remains the best thing ever written about that book.) Nevertheless, there are few better primers of American literature—and there is no more penetrating evaluation of Lardner.