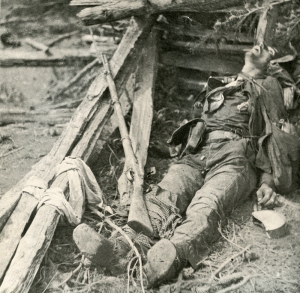 The real war,” Walt Whitman despaired of our Civil War, “will never get into the books.” With one honorable and merciless exception, he was right. To the very few writers who experienced the fighting and to the far larger number who didn’t, the war was unfathomable, or at least indescribable. Ambrose Bierce, a fierce-eyed, extraordinarily brave soldier who fought with the Army of the Ohio for nearly the entire length of the conflict—at, among other killing fields, Shiloh, Chickamauga, Missionary Ridge, and Kennesaw Mountain—and who was later a reporter, an editor, and a short-story writer, produced the only truly honest writing to emerge from combat. Phantoms of a Blood-Stained Period (the title is taken from Bierce’s harrowing memoir “What I Saw of Shiloh”) collects all of Bierce’s writing on the war: his historical reportage on and astonishingly detailed memoirs of specific battles; his letters; and, of course, his surreal short stories (he used all these forms to convey the battle of Chickamauga). An hour with this superbly edited volume will cure any Civil War buff, for Bierce was, as H. L. Mencken declared, “the first writer of fiction ever to treat war realistically” and the first to grasp that soldiers in combat were little different from “bewildered animals dying like hogs in Chicago [stockyards].” Bierce disdained the North’s sanctimonious notion of the war as the Battle Cry of Freedom no less than the South’s romantic idea of the Lost Cause; he saw the conflict as a meaningless and murderous enterprise. Whether he is depicting wild boars eating the entrails of still-living battlefield casualties, or the incineration of a company of soldiers in the forest at Shiloh (“gallant gentlemen who had got what they had enlisted for”), or a boy coming upon his dead mother at Chickamauga, her brains blown out by a shell, Bierce’s sensibility is sardonic, grotesque, hallucinatory, modern. And his short stories, which concentrate on single incidents at the edges of battle, some bounded by only a few minutes, are distinguished by their severity and concision, and by what Edmund Wilson characterized as their “sharp-edged and flexible style, like the ribbon of a wound-up steel tape-measure.” Here is exemplary American prose, and here is the real war—without uplift, without virtue, without purpose.