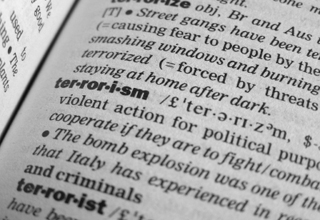 NO END TO WAR: Terrorism in the 21st Century, by Walter Laqueur (Continuum)

The study of terrorism has long been one of the more intellectually suspect fields of academic (and quasi-academic) endeavor. When not engaging in the endless and fruitless debate about who should be counted as a terrorist, too many of the experts preen on television while delivering unfounded speculation.

Walter Laqueur — a deeply learned polyglot historian, whose expertise ranges from 19th-century Germany to 20th-century Egypt — has for decades stood out as one of the very few sober and intelligent voices in this undistinguished crowd. His latest book, ”No End to War,” which surveys trends in terrorism throughout the world but which concentrates on Islamist terrorism, is bolstered by his characteristic strengths and suffers from his few characteristic flaws.

Mr. Laqueur’s wide-ranging intellect demolishes many of the shibboleths that plague discussions of terrorism generally and Islamist terrorism specifically. While some on the left rather mushily urge policymakers to address the root causes of terrorism, Mr. Laqueur helpfully points out that such an approach won’t yield the desired results, since what are commonly identified as the wellsprings of terrorism — poverty and political oppression — fail to account for the terrorism that most threatens the United States. After all, as Mr. Laqueur makes clear, almost no terrorism occurs in the world’s poorest 49 countries, and of course the Sept. 11 terrorists all came from middle- and upper-middle-class families.

Similarly, the 20th century’s most repressive regimes (Stalin’s Soviet Union and Hitler’s Germany) were free of terrorism, while in South America in the 1970’s terrorism first broke out not in the harshest dictatorships, but in Uruguay, the most democratic state. Contrary to the conventional wisdom, then, terrorism flourishes in countries ”democratic in character, or alternatively, in a wholly inefficient dictatorship,” Mr. Lacquer writes. Again contrary to conventional wisdom, he also shows that suicide terrorism isn’t a ”purposeless manifestation of despair,” but is rather a tool used by highly organized groups that train, guide and arm the terrorists. This distinction carries important policy implications, for ”while the suicide terrorist may be unstoppable, those behind him certainly are not; they can be deterred by inflicting unacceptable damage on them.”

Throughout, Mr. Laqueur’s analysis is clear-eyed and unsentimental. He allows, for example, that in its own interests, Israel should long ago have relinquished the territories occupied in the Six Day War, but he reminds readers that the Arab world’s antipathy to the Jewish state predates 1967 and he, quite correctly I believe, predicts that Israel’s withdrawal from the West Bank and Gaza Strip will have little effect on the murderous hatred of Israel that possesses much of the Arab world.

Mr. Laqueur’s impatience with a hearts-and-minds approach to combating terrorism and his equally evident disdain for knee-jerk anti-Americanism are only two of the opinions in ”No End to War” that will appeal to conservatives more than to progressives. But Mr. Laqueur is in a conventional sense nonpartisan. In his assessment of the failures of United States antiterrorist policy, there’s plenty of blame to go around, and criticism for both Presidents Clinton and Bush.

The worst and best features of this book spring from Mr. Laqueur’s training as a historian. Deeply — too deeply — informed by history, ”No End to War” often reads like a short, intelligent analysis that has been unnecessarily padded. In his examination of suicide terrorism, for instance, do we really need discourses on the ”Song of Roland,” on Nordic Sagas and on the Romanian Iron Guard? Mr. Laqueur knows many languages, but he has never mastered English prose, which makes all this extraneous information go down even harder. Still, only a scholar with Mr. Laqueur’s wide historical perspective can assess what, exactly, is new — and newly threatening — in contemporary terrorism.

Nineteenth-century anarchists and 20th-century national liberation movements both sought radical goals, but their use of terrorism was rational and limited. They wanted a lot of people watching, but not a lot of people dead. But by the late 1980’s a new religious-motivated terrorism, which embraced millennialist goals, was unconstrained by the same political, moral and practical considerations. In his most astute (and densest) chapter Mr. Laqueur traces with authority the roots and development of Islamist fanaticism, illuminating above all — in an analysis echoing Bernard Lewis’s — what he sees as its truly uncompromising hatred of the West.

That most Muslims don’t embrace this ideology, Mr. Laqueur argues, is, when it comes to assessing the danger it presents, as true as it is irrelevant, for what now makes fanatical Islamist terrorism so dangerous is the marriage of its unrestrained goals with a highly adaptable, loosely structured international network that can increasingly kill very many people with relative ease.

There is a bright spot in his analysis. Mr. Laqueur hardly views the Arab world as static. Eventually, he says, modernity will transform it. But until it’s complete, that process will exacerbate the very forces most antagonistic to the West. The greatest national-security question ever to face the United States may well be: Will that transformation occur before religious fanatics acquire biological and nuclear weapons? If Mr. Laqueur’s analysis is right, the West is in a race for its life.