The Sky’s the Limit, by Steven Gaines (Little, Brown). If, as Gaines asserts, “real estate has become a voyeuristic preoccupation in America,” then this is one smutty book. It probes the world of Manhattan’s most exclusive apartment houses—both the so-called Good Buildings on Fifth and Park Avenues and the now glam towers on Central Park West—and dishes plenty of tittle-tattle about such matters as the rigors of Tommy Hilfiger’s shockingly successful interview with the co-op board of 820 Fifth Avenue (no endeavor on earth is more arduous than getting into one of these buildings), the details of Donna Karan’s deal for her digs at 55 Central Park West, and celebrity renovations at the San Remo. The gossip is pretty tired or predictable for devoted readers of the aggressively jaded New York Observer, and the potted histories (of the development of apartments in New York, of the Ansonia Hotel, of Sutton Place) read like digests of, for example, Elizabeth Hawes’s New York, New York: How the Apartment House Transformed the Life of the City. But Gaines’s profiles of his guides—some of the fanciest real-estate brokers in the city—are charming. For the most part these people come off as ironic, skeptical, and very smart—and a lot more interesting, sensible, and humane than their clients. But what makes this book really fascinating is what makes such dated books as Cleveland Amory’s and Stephen Birmingham’s portraits of the rich and well-born, and John O’Hara’s novels, still arresting: the analysis of minute social gradations within the privileged classes. As Gaines nicely puts it, “The location of an apartment half a block in either direction, the age or construction of a particular building … can peg your social or financial status, your religious or ethnic background, or your sexual preference.” For instance, even now that Fifth Avenue has nearly completed its evolution (or, some would say, decline) into its current tinselly condition (read “the home of more and more celebrities,” but really read “the home of more and more Jews”), Central Park still represents an enormous social chasm, between the East Side (read “fewer Jews”) and the West Side (“more Jews”). On this very small island the differences between exclusive enclaves are at once subtle and vast; and no doubt Mariah Carey really did feel “banished,” as Gaines recounts, when the co-op board of the Upper West Side’s Ardsley rejected her and she beat a retreat to “the multimillion dollar confines of the lofts of TriBeCa”—where she consoled herself by hiring “the uptown ‘Prince of Chintz,’ Mario Buatta” to decorate her penthouse triplex. Gaines precisely dissects the distinctions between, say, the milieus of the Upper East Side’s chilly and remote (in more ways than one) Sutton Place and its lovely haute bourgeois Carnegie Hill, and between Chelsea and the West Village, but surprisingly he fails to explicate those between the apartment houses on Park Avenue and the ones on Fifth (again, read “fewer Jews, more Jews”)—distinctions that Tom Wolfe has keenly gauged. Indeed, some Good Buildings are better than others, and no two are good in the same way. With such formidable and intrusive vetting procedures, these edifices can’t help having marked personalities; in fact, they’re “vertical neighborhoods,” explains the most socially exclusive of Gaines’s brokers. Gaines, who wrote the similar Philistines at the Hedgerow, a chronicle of mansions and millionaires in the Hamptons, has the formula of gossipy sociology down pat; but anyone who describes the Upper West Side’s Columbus Avenue—a boulevard that epitomizes urban gentrification, meaning it’s lined with the favorite chain stores of the upper middle class and with far too many restaurants that serve brunch—as “a seething multicultural and honky-tonk world” with a “Tenderloin feel” has too thoroughly absorbed the peculiar viewpoint of his subjects.

London 1945, by Maureen Waller (St. Martin’s). Wartime London is a great literary subject. The ravages were so terrible (pieces of children littered

the bomb sites), so poignant (treasures such as the Guards’ Chapel and the Great Synagogue lost, five million books destroyed in a single night in a bombing raid), and so surreal (walking back from lunch at Simpson’s, an editor of the Evening Standard noticed that the blast from a V-1 flying bomb had stripped the leaves from the trees and replaced them with human flesh). Also, the sustained attack over five years on a great and civilized city provided ample scope for the usual mixture of cowardice and heroism, selfishness and altruism, fecklessness and pluck. And finally, so many sensitive and articulate people recorded and distilled their experiences there. Of course these include George Orwell (“The Lion and the Unicorn”), Anthony Powell (The Valley of Bones, The Soldier’s Art, The Military Philosophers), Evelyn Waugh (Sword of Honour), Mollie Panter-Downes (London War Notes), Henry Green (Caught), Elizabeth Bowen (The Heat of the Day), Harold Nicolson (Diaries and Letters: The War Years), and Graham Greene (The End of the Affair). But hundreds of literate and well-spoken ordinary men and women—clerks, housewives, doctors, social workers—also wrote vivid, funny, moving, and stylish diaries and letters, or were interviewed during the war (in its efforts to keep citizens productive and healthy, officialdom collected information of unprecedented depth and range about their everyday lives). Although Waller isn’t the first to exploit these sources specifically or this rich subject generally (London 1945 joins the ranks of such works as Philip Zeigler’s London at War and Robert Hewison’sUnder Siege: Literary Life in London, 1939—1945), her 528-page book is at once abundantly and discerningly detailed (she aptly quotes a Walthamstow woman’s description of the silent V-2s, successors of the droning V-1s, as “bombs with slippers on”), and her depiction of the daily fabric of wartime life in the capital is unrivaled. Moreover, Waller has used the last year of the war as her cynosure, an illuminating approach that allows her to show how the previous five years ruptured all of London life, from the cityscape to family relations to fashion. More important, it reveals not the familiar story of indomitable Londoners facing the Blitz but, rather, how the fervor of “their finest hour” modulated into a squalid and dispiriting routine, how defiance lapsed into snappishness, and how resilience gave way to exhaustion, cynicism, and not infrequently despair (one Croyden woman who gassed herself wrote in her suicide note simply: “The war lasted too long for me. I can’t go on”). This is a sad book about a city staggering to victory.

The Command of the Ocean, by N.A.M. Rodger (Norton). The second installment of Rodger’s projected three-part naval history of Britain is one of very few books that actually warrant the adjective “magisterial.” In this 900-plus-page volume, which concentrates on the period of the so-called Second Hundred Years’ War against the French (1689—1815), Rodger elucidates the Royal Navy’s rise to global preponderance and its consolidation as the single most influential institution in the nation’s life. “Naval dominance of European waters,” he asserts, “was the largest, longest, most complex and expensive project ever undertaken by the British state and society,” and this sprawling and intricate story perforce embraces diplomacy, religion, and politics; economic, technological, and social trends; and developments in medicine and agriculture. Nothing, from the sociology of the dockyards to the evolution of gunnery tactics, escapes Rodger’s acute analysis. Rodger made his reputation with the seminal work The Wooden World, in which he dissected the elaborately organized and highly cooperative life on board the ships of the eighteenth-century navy (and in the process completely overturned the notion that “rum, sodomy, and the lash” were its defining traditions), so it’s no surprise that his evocation of that life here is lavish and fascinating. Women and children, he reveals, were common aboard ship (evidence suggests that one warship carried as many as a hundred wives), and were not infrequently killed in action (when one seaman and his wife died in combat, the wardroom goat suckled their three-week-old orphan). The vast number of people and wide variety of skills that war at sea demanded made the navy an astonishingly open institution: a senior petty officer during the Napoleonic Wars, for instance, was both black and a woman (though the latter fact was discovered only after she’d already served eleven years). Although Rodger is discerning in his assessment of every social level of the wooden world, he’s especially perceptive in analyzing the recruitment, training, and culture of the officer corps; the navy, which required that its officers begin their careers by carrying out the duties of common seamen and mastering the skills of those they would command, “identified and promoted good men very fast,” making it undoubtedly the most meritocratic institution in a society defined by archaic privilege. But as colorful as is this book’s account of life and combat at sea, Rodger focuses on the developments on land that gave Britain command of the ocean. The most crucial advances in his story aren’t naval or even technological but, rather, financial and administrative. The full capabilities of sea power could be realized only “when ships could be kept at sea with healthy crews for long periods.” This seemingly obvious requirement demanded a national endeavor of unprecedented complexity and scope. In this period the British state, thanks to a greatly increased tax base and a wonderfully efficient collection system, had access to a greater portion of national income than did its rivals, and a huge amount of that wealth went to the state’s highest-spending and 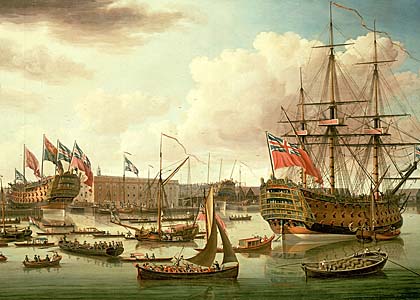 most technologically sophisticated enterprise: its navy, which was by far Britain’s largest contractor and employer, as well as the largest buyer of foodstuffs in the London markets. Facing problems of management on a scale “as yet unknown to private business,” the navy built administrative systems of enormous competence, run by a cadre of officials of rare probity and ability (of whom Samuel Pepys was the most celebrated). This bureaucracy nurtured advances in technology high and low, managed contractors and adjusted markets with finesse, oversaw developments in medicine and hygiene (the navy—whose officers were fanatical about the cleanliness of their ships—enlisted some of Britain’s most distinguished physicians to improve shipboard sanitation and diet, and its Sick and Hurt Board laid the foundations for the public-health movement and for the science of epidemiology), and, most important, revolutionized the feeding of men. Rodger makes clear that the single indispensable ingredient of the navy’s success was its Victualling Board, which in its time must have been the world’s best-organized government administration. Thanks to its efforts, thousands of men could be pent up in ships on the open seas for half a year yet be, as Rodger shows, “the healthiest body of British subjects in the world.”

Rodger’s appraisal of logistics and bureaucracy is the most penetrating and skillful I’ve encountered. Only a writer of verve could make these potentially deadening subjects compelling. It must have been tempting for Rodger to rely solely on his staggering erudition (he cites sources written in a dozen languages) and the sure knowledge that regardless of its literary qualities, his book will be the definitive treatment of its subject for at least a century (Paul Kennedy has justifiably said that Rodger’s series will be “one of the great works of historical scholarship of our age”). But there’s not a lazy sentence here, and a keen intelligence propels every paragraph. Sadly, though, with only a couple of exceptions, Rodger confines his acerbic wit to his eighty-six-page (!) annotated bibliography, which is full of waspish asides, including this one, directed at The Admiralty, by one N.A.M. Rodger: “Sketchy and unreliable.”