Affirming the evident, the American Institute of Architects recently judged Chicago the city with the finest architecture in the country. To take the obvious a bit further, Chicago holds more important buildings of the past century and a half than any other place in the world. And to look at it another way, Chicago’s architecture constitutes one of this country’s greatest contributions to modern civilization. Appropriately enough, since Lewis Mumford’s 1931 classic The Brown Decades and Henry-Russell Hitchcock and Philip Johnson’s catalogue for the Museum of Modern Art’s 1933 show, Early Modern Architecture, Chicago, 1870—1910, writers have produced a wealth of often beautiful books that examine myriad aspects of this rich subject. They’ve authored inventive social and environmental histories. They’ve traced the city’s architectural evolution, in works like Carl W. Condit’s

pioneering annals of Chicago’s building technology and the Art Institute of Chicago’s monumental, multi-authored, gorgeous (but highly selective, often eccentric, and overly specialized) two-volume exhibition catalogue of the city’s architecture and design. They’ve chronicled the lives and careers of the seminal architects—Louis Sullivan, John W. Root, Daniel Burnham, Frank Lloyd Wright, and Ludwig Mies van der Rohe—in biographies that range from the workmanlike to the sparkling. They’ve probed, in meticulous and abundantly illustrated monographs, many of Chicago’s most significant structures—including the Glessner, Charnley, and Robie houses and the Carson Pirie Scott building—and the creations of many of its important architectural firms, including Holabird and Roche; Holabird and Root; Graham, Anderson, Probst, and White (GAPW); Keck and Keck; Perkins and Will; and Skidmore, Owings, and Merrill (SOM). There’s even a book on SOM’s interior design, specifically, and the past three years alone saw the publication of definitive works on Adler and Sullivan’s Auditorium Building and on the creations of Daniel H. Burnham’s firms. All these books, though, are obviously aimed at the cognoscenti, and Chicago’s architecture—a national cultural bequest as expressive of this country’s creative character as movies and jazz—demands to be illuminated for the general reader. Here the choices have been inadequate. To be sure, two exceptionally incisive and well-written handbooks—the saucy, compact Chicago’s Famous Buildings and the more comprehensive but even less detailed AIA Guide—identify the major edifices and concisely explain their significance; but these books are frustrating, not just because of their brevity and lack of narrative but also because they’re arranged geographically, not chronologically, so they obscure the development of and continuities in Chicago’s architectural direction and styles. And—an even greater shortcoming—their photographs are uniformly small and in black and white, often unimaginative, and nearly exclusively devoted to exteriors.

Chicago Architecture and Design, by Jay Pridmore and George A. Larson, a thoroughly revised and greatly expanded edition of a work originally published in 1993, and a wholly satisfying marriage of photography and text, is by far the best introduction for the general reader. Its plenteous, aptly chosen, sometimes stark, sometimes lively, but always extraordinarily comprehensible photographs are mostly drawn from the archives of Hedrich-Blessing, the venerable Chicago architectural-photography studio. Captured in these images are, for instance, the mass and rhythmic grace of H. H. Richardson’s near-mythical and long-ago demolished Wholesale Store (but why no picture of Holabird and Roche’s demolished Tacoma Building?), the simplicity and power of Burnham and Root’s Monadnock Building, the golden light that infuses their Rookery Building, the monumentality and surprising sprightliness of the Auditorium Building, and the almost anachronistic functionalist elegance of Burnham and Atwood’s Reliance and Railway Exchange Buildings, with their gently undulating curtain walls of terra-cotta and glass. Most books for the nonspecialist linger with these and other iconic buildings of the Chicago and Prairie Schools and then rush forward to praise the purity and exactness of Mies’s IIT campus and his 860/880 North Lake Shore Drive apartments before concluding with a few photographs displaying the postmodernist exuberance of the swaggering, cape-clad Helmut Jahn (long the dominant figure among contemporary Chicago architects). In contrast, Pridmore and Larson properly emphasize the still neglected interregnum of the 1920s and 1930s, as they explicate and champion the subtle blending of modernism and art deco achieved in Holabird and Root’s urbane, sleekly masculine skyscrapers, in GAPW’s streamlined Field Building and at once plain and sumptuous Merchandise Mart, and in the homegrown, pre-Miesian modernism of the houses of Keck and Keck and Paul Schweikher, and the interiors of Marianne Willisch, with their clean and graceful lines and airy, light-filled rooms. Pridmore, who wrote the text, has achieved a feat of synthesis as he chronicles a century and a half of the city’s architectural history in a smooth, lucid style that eschews the gaseous abstractions infecting far too much writing about architecture. Even when retailing the frequent and bitter controversies that have marked the past few decades of the Chicago architectural scene—over, say, Jahn’s clamorous James R. Thompson Center, Rem Koolhaas’s equally cacophonous IIT student center, Thomas Beeby’s historically eclectic public library, or John Vinci’s restrained, elegant, and unfairly disparaged Arts Club—Pridmore never-theless remains authoritative and cool. (Though occasionally he weighs in with invariably considered and fair-minded assessments.) 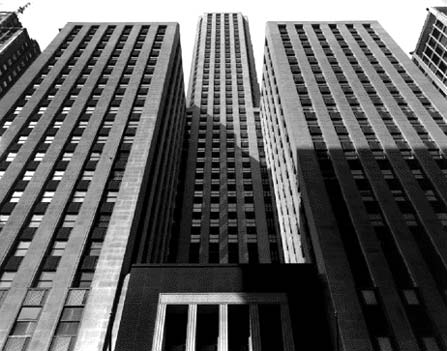 reigned in the city from Mies’s arrival there, at the end of the 1930s, through the late 1960s. Pridmore is appropriately skeptical of such efforts, but he’s sensitive to the often nuanced continuities in the city’s architecture across the decades, continuities impossible to deny, given the interconnections between generations of the city’s architects and the historical-mindedness of the architecture profession coupled with the long-recognized unique place the city occupies in the annals of architecture. From the 1870s through at least the 1970s, as Jahn astutely notes in a foreword to the book, the relationship between design and engineering was unusually close (Root excelled equally in the two fields, and the city’s architectural history is characterized by such architect-engineer collaborations as Adler and Sullivan and SOM’s Bruce Graham and Fazlur Khan). This has engendered buildings distinguished by what the critics Franz Schulze and Kevin Harrington call “a high level of detail, craft, and finish,” and ones that far more effortlessly than most reconcile form and function, which is probably one explanation for the most compelling and amorphous quality of Chicago’s finest buildings: they usually manage to combine a handsome solidity with a graceful clarity. This means that for me the book’s last section, on the globalization of the architecture in Chicago, makes for depressing reading. The most ambitious projects in the city—as in nearly all the world’s great cities—get bestowed more and more on what Pridmore nicely calls “international architectural stars,” who are designing for Chicago in Los Angeles, New York, Amsterdam, and Osaka. I find that this results in a homogenized, globalized aesthetic. To me, Chicago’s best building of the new century is the Sofitel on the Gold Coast (alas, unnoted by Pridmore). Although the Parisian architect Jean-Paul Viguier designed the striking, cantilevered, bladelike, at once slick and luxurious structure, its unusual footprint and modernist look respond marvelously to its site and neighborhood, and Viguier’s heroic efforts to “bring the sun into the project” show a sensitivity to both the city’s climate and its architectural heritage, which virtually fetishizes openness and natural light. But another structure, the Millennium Park band shell, also designed by an out-of-towner, Frank Gehry, has won the attention and praise; Pridmore, in a rare lapse, judges it “the most spectacular structure to go up in early-twenty-first-century Chicago.” While no doubt dramatic, and apparently an acoustic marvel, the band shell, festooned with the architect’s trademark nifty giant stainless-steel ribbons, could of course be anywhere (Angelenos with somewhat untrained eyes would swear they’ve seen something awfully similar downtown, on Bunker Hill). Despite Chicago’s abundance of talented young architects, including Jeanne Gang, “Chicago” architecture is no longer a living tradition. But there’s nothing to be done. The forces of globalism, or cosmopolitanism, as Marx both lamented and cheered long ago, are unstoppable.

book, a collection of self-consciously revisionist essays on the history of Chicago architecture, epitomizes what’s right and what’s wrong with academe today. Part of the publisher’s generally excellent and attractively produced series Chicago Architecture and Urbanism, the book contains several superb pieces—among them a brilliantly fresh re-examination of Holabird and Roche’s Marquette Building; an analysis of the commercial, social, and political forces behind the preservation movement; and a postmortem on high-rise public housing. All these inventively illuminate the historical circumstances in which the city’s architecture was realized. Indeed, the new urban and architectural history is often at its best when it precisely elucidates how such non-aesthetes as bankers, businessmen, and real-estate developers influence both individual structures and the look of cities. But the new history is predictably at its worst when it’s tempted down the primrose path of theory and raceclassgendersexualorientation. The results are the sort of silly, jargon-clotted, and opaque restatements of the more or less obvious that make the professoriat look just ridiculous—and the worst is too amply on display here.

Building Jerusalem: The Rise and Fall of the Victorian City, by Tristram Hunt (Metropolitan Books). This, on the other hand, is among the best—among the most ambitious, sweeping, original, and significant—books of urban history to be published in the past decade. Hunt, one of those young, audacious, and brilliant British historians who write with sureness and verve, has taken on a huge subject: the Victorians’ response—political, architectural, religious, and intellectual—to the rise of the modern industrial city. The political, social, moral, public-health, and infrastructure problems created by the chaotic and fetid cities of the Industrial Revolution were unprecedented and, at first, overwhelming (life expectancy in the slums of Glasgow and Liverpool in the 1840s dropped to levels unseen since the Black Death). In defining the conditions the early Victorians confronted, Hunt turns at first to the usual sources—Carlyle and Elizabeth Gaskell, Engels and Mayhew—and his survey is fluent if rather predictable. But then he boldly illuminates how the industrialized city and the problems it engendered came largely to dominate and define Victorian literature, philosophy, aesthetics, and, above all, politics and architecture. Hunt ranges with authority from Southey’s anti-industrial diatribes to Glasgow’s waterworks to Ruskin’s influence on civic architecture in the Midlands.

Hunt fully hits his stride, though, when he explicates the extraordinarily effective measures that the conscientious, evangelical, middle-class municipal

leadership took in the second half of the nineteenth century to subdue dangerous and unlovely cities and transform them into clean, well-lit, well-governed, culturally confident metropolises. (One of his most perspicacious insights is to trace the direct line between the burghers’ ideal of civic virtue and the development of municipal socialism.) Hunt’s is above all a tale of merchant princes in Manchester and Liverpool, in Glasgow, Leeds, and Birmingham (that city’s mayor, Joseph Chamberlain, is the dominant personality in the book), who built not only roads and sewers but galleries, libraries, and some of the greatest edifices and public spaces of nineteenth-century urban civilization—Bradford’s Venetian Gothic Wool Exchange; Liverpool’s Albert Dock and St. George’s Hall (which the architectural historian Nikolaus Pevsner praised as among the greatest neo-Grecian buildings in the world); Birmingham’s broad boulevards, stately squares, and grand domed council house; and Manchester’s palazzo-inspired warehouses and magnificent neo-Gothic town hall. Hunt evokes a time of intense public-spiritedness, upright municipal leadership, and a strong and locally rooted civic culture (which was, as he notes, “more often than not the indigenous product of a Nonconformist conscience”) that thrived before a mobile national elite absorbed it. Although he recognizes that the clock can’t be turned back, he has clearly written a paean to the provincial bourgeoisie. Formerly much maligned, that group has recently received sympathetic treatment in two other histories of equal discernment but narrower scope: Simon Gunn’s The Public Culture of the Victorian Middle Class, and Public Lives, an affectionate portrait of middle-class Glasgow families, by Eleanor Gordon and Gwyneth Nair.