AN INFURIATING, IDIOSYNCRATIC CRITIC CAN’T HELP BUT BE ELEGIAC IN CATALOGUING THE HISTORY OF FILM. 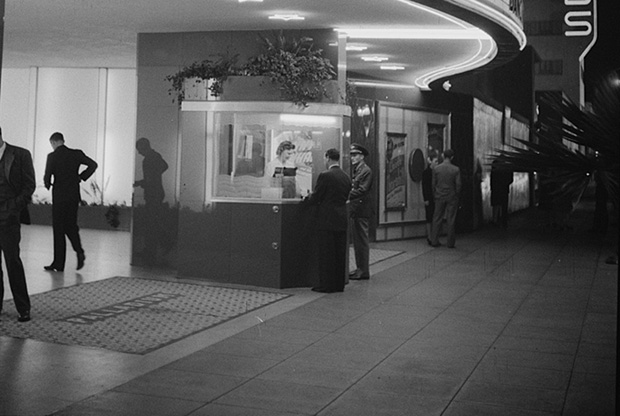 NOW WE HAVE the long-called-for companion to David Thomson’s A Biographical Dictionary of Film, first published in 1975 and throughout its various editions the most seductive, infuriating, and influential reference book ever written on the movies. Thomson, an Englishman living in San Francisco, is the author of more than 20 books, including several on movie personalities such as Warren Beatty, Orson Welles, Nicole Kidman, and David O. Selznick, and others on such disparate subjects as Scott’s Antarctic expedition, Laurence Sterne, and Las Vegas. “Have You Seen …?”—a by turns astringent and gushy appraisal of 1,000 movies made from 1895 to 2007—is, for better and worse, something of a muddle. Whereas the lyrical and bullying, ardent and Olympian, minutely detailed and defiantly impressionistic Dictionary, with its closely packed, tightly printed, double-columned pages, aims toward the comprehensive, this work discriminates in what it includes and what it doesn’t—but does so using several different and somewhat contradictory criteria.

With its god-awful title, the book ostensibly responds to the question most frequently asked of Thomson: “What movies should I watch?” To be sure, he has included his favorites among the single-page entries. (The format, along with many other features, makes this a much less idiosyncratic work than the eccentric and audacious Dictionary, whose entries varied from three sentences on Wes Anderson to several thousand words on Graham Greene.) But he also writes about many pictures he can’t stand, including the 1959 Ben-Hur (“Has anyone made a voluntary decision to see [it] in recent years?”), Kramer vs. Kramer (a work of “inane studied gentility”), and Rain Man (“the smug movie of a culture charging down a dead-end street”). All of these films won the Oscar for Best Picture, so the reader might assume that Thomson has gathered both movies he esteems and ones he judges influential commercially, culturally, or otherwise.

Not exactly: he omits Mrs. Miniver, Gentleman’s Agreement, and Crash—all Best Picture winners, all social or political bellwethers, and all movies he (justifiably) doesn’t like. He also ignores the Hope-Crosby “Road” movies, even though—as he notes in his typically penetrating and off-kilter history of Hollywood, The Whole Equation (the title is from The Last Tycoon)—those “silly … stay-at-home ‘Road’ films” exercised a profound “healing effect” on America, and their stars were “the top box office attraction in America throughout the 1940s.” Oh—and he does include four entries on TV series (The Singing Detective; Tinker, Tailor, Soldier, Spy; The Sopranos; and Twenty Thousand Streets Under the Sky), products of a medium whose constraints and possibilities differ significantly from those of the cinema. Thomson can’t resist forays into television: his entry on Johnny Carson is among the lengthiest and most perceptive in the Dictionary.

This jumble reveals a highly cultivated critical mind as it develops and refines judgments on minor issues, major themes, and first-order principles concerning the most vital art form of the 20th century and our social and emotional engagement with it. Throughout, Thomson points out the films Oscar has honored and shunned—verdicts he deems “misleading and unhelpful in the intelligent regard for movies in America”—to support his contention that assessments of movie quality have been consistently “ludicrous.” Embarrassingly stupid pronouncements aren’t limited to the movies, of course, but the cinema has been particularly susceptible to them. The apparently obvious reason is that the sordid commercial standards for judging a huge industry’s product have squashed the standards for judging creative endeavor. But that’s hardly adequate. After all, stately, self-important, and socially worthy pictures, not mindless blockbusters, crowd the list of Oscar winners over the years. And if many of the industry’s judgments have been self-regarding and boneheaded, those of the academics and art-house critics have been faddish. How many critics in 1973 would have assayed The Godfather superior to one of their then favorites, Bergman’s ponderous The Seventh Seal?

Still, Thomson insists that judgments be made, and that they be based on a deep comprehension of the medium. This wasn’t so uncommon when movies were truly a mass entertainment—when they were what Thomson calls “the bloodstream of a great nation” and something like half or three-quarters of the population went to the pictures each week; even up through the early 1970s, a smaller audience had grown up in a movie-saturated culture. (“In the darkness at the movies,” as Pauline Kael romanticized the situation, “where nothing is asked of us and we are left alone, the liberation from duty and constraint allows us to develop our own aesthetic responses.”)

But today less than 10 percent of the population goes to the movies weekly, and the older pictures that account for most of the entries in this book are unknown to nearly every young movie-watcher. The availability of sparklingly restored prints of classics on DVD and on cable stations like TCM hasn’t come close to

compensating for the fact that old movies—good, bad, or indifferent, in all their creaky splendor—are no longer shown ad infinitum on local TV, where they weren’t enshrined by cineastes but were just part of the movie-watcher’s mental landscape. Today that landscape is awfully barren. The college seniors in a UCLA seminar I recently taught fancy themselves sophisticated filmgoers, but haven’t seen Grand Illusion, Chinatown, or a single John Ford, Cary Grant, or Fred Astaire and Ginger Rogers movie. Urbane newspaper readers, as Thomson bemoans, deem Cinema Paradiso the best foreign-language movie ever made—because they’ve seen it, and don’t know its betters (“if you haven’t read much else, then Ian Fleming’s Goldfinger may be the best book you’ve ever read”).

Thomson tries to set things right. He deflates undeserved reputations: The Graduate, “said to be one of everybody’s favorites!,” is “cold, heartless entertainment, never more ruthless than when dumping charm on us”; Lawrence of Arabia “is spectacular enough to pass for a thinking man’s epic (without the thought).” And he champions the overlooked (John Huston’s Fat City, Ida Lupino in The Hard Way). In his characteristically discursive manner, he builds his arguments over several entries. Jeff Bridges, thanks to his control and wounded grace (in Fat City, Heaven’s Gate, Cutter and Bone, The Fabulous Baker Boys, The Big Lebowski), emerges convincingly as “the essential … actor of modern American cinema”; Michael Curtiz’s“blithe lack of self-regard” in his direction of The Adventures of Robin Hood, Casablanca, Mildred Pierce, Yankee Doodle Dandy makes him “not merely lightly likable [take that, Andrew Sarris] but a genius.” Thomson recognizes “the wit, the precision, the timing, the class” of What’s Up, Doc? And he isn’t taken in, not for a second, by that other attempt to modernize the romantic comedy, the jejune When Harry Met Sally.

Alas, when it comes to the movies he loves most, Thomson pretty much throws up his hands, having written and talked about them for decades: Trouble in Paradise, TheRules of the Game (“the greatest film by the greatest director”), Les Enfants du Paradis (“the warmth and kindness of the film is not easily separated from the fluency of its style”), Swing Time (he knows enough to give Arlene Croce the last word on this picture), all the films of Preston Sturges (“the man you must come to love if this book will mean anything to you”), Bringing Up Baby, His Girl Friday (“we are talking about a picture that received not a single Academy nomination, and we are talking about one of the glories of American film”), To Be or Not to Be, Meet Me in St. Louis (a movie set in 1903 that captures perfectly the achiness of the Second World War home front), Double Indemnity (“Fred MacMurray simply looks a better and better actor as the years pass”; yes!), Red River (“my favorite picture”), Celine and Julie Go Boating (“I don’t think there has ever been a portrait so fond, so oblique, so touching, or so funny of what happens to us at the movies”), The Godfather, Chinatown.

Thomson is most penetrating when he develops and enlarges his ideas and arguments over multiple entries, and when he’s neither praising nor slamming but simultaneously giving and taking away: see his ambivalent analyses of Do the Right Thing; Tinker, Tailor; the often magnificent Heaven’s Gate, the photography of which is exactly “heartbreaking”; and The Sopranos—expertly done, but “The Godfather plays every year; The Sopranos in reruns will bore you.”

It’s impossible to read this book from cover to cover without being convinced that Hollywood’s greatest achievements are not the monotonously important dramas that so often sucker in Academy voters but the stylish, highly polished entertainments, largely comedies, that endure even though they weren’t made to be lasting. Above all, Thomson prizes wit, charm, and good-natured ease. He’s reached an age, he notes in his appraisal of North by Northwest, when he’d “rather have a great screwball comedy than a profound tragedy. After all, tragedy is all around us and screwball is something only the movies can do.”

Thomson has never been backward-looking—he’s remarkably open and generous to contemporary talent, and has been particularly astute if exasperatingly partisan in his assessments of our current actors (witness his mad crush on Nicole Kidman). But this is an elegiac work. Even while his fine eye picks up the subtle, brilliant costuming in Leaving Las Vegas (1995) and even while he neatly dissects the rigor and wit of The Queen (2006) and praises mightily Magnolia (a 1999 film that has grown even more in his estimation since the most recent edition of the Dictionary) and You the Living(2007), the evidence is in the reader’s hands:

If you were to make a graph of when the films in this book were made, there is a great hump that stands for the thirties, the forties, the fifties. I can try to moderate it, but I do not apologize for it.

He understands that the critical task is essentially comparative, and he acknowledges that Have You Seen …?” in effect “weighs the old against the new.” The result, he fears, is that “this book may come off as helplessly nostalgic.”

Of course it does. It’s nostalgic for a time when the movies were “everyone’s sport,” and their largest audience—and those who determined what picture to see—were women, not teenage boys. “I would suggest,” Thomson wrote in The Whole Equation, “that any potential reawakening of American film as a mainstream current may turn on how far the country can ever admit its feminine side.” It’s nostalgic for a time when the West had something close to a mass art form, albeit one defined by a mixture of aspiration, failed effort, and compromise. It’s nostalgic, that is, for a time far, far away, a time before Star Wars—“the line in the sand, the disastrous event,” as Thomson rightly says, unconsciously echoing Kael—turned American cinema into an adjunct to the video-game industry. (The annual turnover for video games dwarfs domestic theatrical-box-office and DVD revenue.) This is the complex story of a far-reaching commercial and cultural change, one Thomson has already chronicled in The Whole Equation. So why bother to ask, as he does here, “Is it possible that the movies are going to end up as museum pieces?” They already have.