H. L. MENCKEN TRAINED AMERICAN INTELLECTUALS IN WHAT TO LIKE—AND HOW TO REBEL. 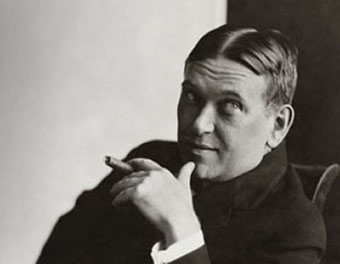 BETTER late than never. Only after including works by such eminences as Charles Brockden Brown, James Weldon Johnson, and Philip K. Dick has the Library of America come round to canonizing Henry Mencken. Now his complete Prejudices series is jacketed in those spiffy glossy-black covers and printed on that tissuey for-the-ages stock. Uneven and overstuffed, the Prejudices books—six collections of Mencken’s cultural, social, and literary criticism focusing on the American scene, published between 1919 and 1927—aren’t Mencken’s finest work: LOA really should follow up with his The American Language, which remains one of the most profound and entertaining studies of this country’s culture ever written, and his winsome memoirs Happy Days, Newspaper Days, and Heathen Days.

But while A Book of Prefaces is Mencken’s most significant and carefully selected collection of criticism, the Prejudices books are his most representative work—leaving aside, of course, his newspaper reporting and writing, which was his principal occupation for most of the period from 1899 to 1948. To an extent, a little Prejudices goes a long way. Mencken’s excoriations of Puritanism and the genteel tradition seem old hat—until the reader remembers that when Mencken took up his lonely and courageous crusades, what are now stock reproaches among the intelligentsia were anything but. He risked prison and a considerable part of his livelihood when he took on the Comstocks, and he faced a furiously repressive federal government when he opposed America’s deceitful, missionary foreign policy and the suspension of civil liberties during and following the First World War.

Mencken was a solid and in many ways parochial Baltimore burgher. (He was horrified when his longtime fight against intolerance made him a hero of the liberals and radicals he defended. That of course made his fight all the more heroic.) Mencken nevertheless championed the cultural avant-garde, and hence was scorned by the cultural establishment. He introduced a hostile American readership to Nietzsche and Ibsen; published, as co-editor of TheSmart Set and editor of The American Mercury, Ezra Pound, the writers of the Harlem Renaissance, and the first serious studies of jazz (even though he couldn’t stand the music); and hailed Ambrose Bierce, Dreiser, Eugene O’Neill, Willa Cather, Sinclair Lewis, Ring Lardner, and Fitzgerald (his review of Main Street and his critiques of Lardner are the most penetrating I’ve read).

That these writers now rest in the pantheon, and that Americans who fancy themselves intellectuals reflexively oppose what they take to be the established order, is largely owing to Mencken, whom Walter Lippmann described in 1926 as “the most powerful personal influence on this whole generation of educated people.” In fact he was more than that—he is the most influential critic in American history, really the only influential critic in American history. He exerted that influence thanks not to his ideas but almost entirely to his beguiling style, at once rollicking and astringent. Mencken was the first serious writer to be saturated, as Edmund Wilson noted in a 1921 essay, with “modern commercial America,” a culture that captivated and appalled him. And so his prose, as Wilson said, married an almost 18th-century lucidity and force to “the slang of the common man … and compelled it to dance a ballet.”

For all his swashbuckling assaults on what he called the “booboisie,” Mencken was the first important writer to probe and relish middle-class American life, albeit usually with merry disdain. He captured and catalogued its speech, its standardized diet, its gadgets, its burlesques (literal and figurative), the haphazard ugliness of its towns. He realized that vulgar, commercial, exuberant American civilization—and especially its most complex expression, its language—was a world-conquering juggernaut. Mencken told American intellectuals that their country’s popular culture—not just its folk culture—was a worthy, in fact vital, subject to scrutinize. True, Mencken’s jaundiced view could lapse into a sterile cruelty (in this he resembled his admirer, Evelyn Waugh, who had an appointment to meet him the day after Mencken suffered the stroke that ended his creative life). But usually he regarded the carnival of his country’s buncombe with an indulgent horror. To hate like that is to love forever.

Despite his fascination with the American scene, though, Mencken remains a profoundly un-American figure. Our public and private life still embrace improvement (see nearly all the brave thinkers featured in this issue of the magazine). Mencken was brave enough to turn his face from all that, with a mixture of ironic dismay and scorn: to recognize that, say (in a great throwaway line), “in women, once they get beyond adolescence, there is always a saving touch of irony; the life they lead infallibly makes cynics of them”; to grasp that the purpose of literature is not to expose, instruct, explicate ideas, or advance causes; to apprehend that Lardner’s achievement was “to take familiar personages, usually regarded with tolerant smiles, and to show the viciousness under their superficial imbecility”; and to embrace a view of public affairs without uplift, without virtue, without purpose. He knew all efforts at betterment are ultimately shabby, inane, narcissistic, or brutal—and that knowledge renders his satiric force nearly tragic.