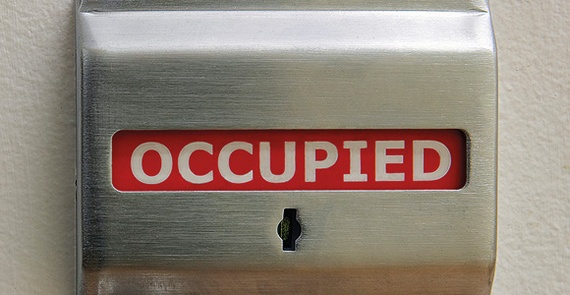 Public restrooms (now there’s a euphemism) are complex and ambiguous, because they offer a communal setting for performing deeply private deeds. This collection of essays by academics from a variety of disciplines probes the legal, sociological, public-health, and architectural dimensions of these places. Without them, our business, commercial, educational, and transportation systems could not function. Indeed, the historian Erika Rappaport has inventively argued that the provision of ladies’ toilets in 19th-century London department stores, by finally giving fashionable women a place to relieve themselves, made it possible for them to enter the public sphere—and hence helped catalyze the suffragist movement. But the essential role of public restrooms has gone largely unexamined (with the important exceptions of Rappaport’s pioneering Shopping for Pleasure; the architect Alexander Kira’s clinically detailed, uncomfortably explicit 1966 study The Bathroom; and George Costanza’s colloquies on Seinfeld). Although some of the essays assembled here are infected with predictable academic jargon, this book offers precise insights—want to keep a public bathroom clean? Stick some flowers there. And it often cleverly illuminates what’s in plain sight—say, the reasons why New York has so few female cabbies—but is usually ignored or assiduously avoided.