TWO BOOKS UNCOVER THE ROMANCE AND ADVENTURE OF ARCHAEOLOGY

The Road to Ruins, by Ian Graham (New Mexico) and The Leopard’s Tale, by Ian Hodder (Thames and Hudson) 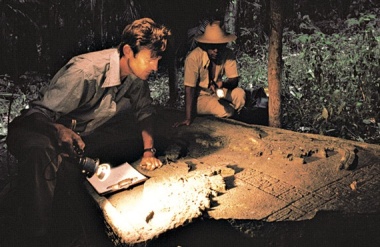 IN 1957, IAN GRAHAM, a 33-year-old Englishman—handsome, highborn, impecunious, somewhat adrift—sailed to New York with his vintage Rolls Royce coupé, a car once driven by Lawrence of Arabia. The hard-up swell stayed at the 23rd Street Y, met Salvador Dalí for drinks at the St. Regis, worked briefly as a photographic assistant to Irving Penn, and then set out in the coupé for Los Angeles. A detour to attend the Maryland Hunt Cup and Ball took him south. He found, as he would later recall, that “once one deviates from the straight and narrow path, it’s all too easy to stray further afield”—and so he meandered to Charleston, Natchez, Dallas, and Houston. There, Graham—a man of abundant charm, who was “always open to a good offer”—was befriended by a lumber baron who lent him his estate on the Galveston shore. (A virtuoso sponger, Graham would guilelessly freeload as a guest in the best houses, from Acapulco to Pasadena to Belize City to Manhattan.) From the Gulf, he drove to the legendary King Ranch, and then turned what was to be a quick trip across the Rio Grande into a nearly 600-mile journey to Mexico City. And there—in the galleries at the Museo Nacional and in a conversation at a dinner party at the house of the patrician, striking British painter Bridget Bate Tichenor—this appealing, off-on-a-spree man, no longer young, “on the alert for some opportunity … to earn a living pleasantly,” stumbled on his life’s work, a field wholly new to him: Mayan archaeology.

In this beguiling autobiography, Graham, who was awarded a MacArthur genius grant in 1981 and is the founding director of the Corpus of Maya Hieroglyphic Inscriptions Program at Harvard’s Peabody Museum of Archaeology and Ethnology, recalls a charmed life as an archaeologist-explorer. In a trackless wilderness of jaguars and rattlesnakes, of cities and stelae swallowed up by the jungle thousands of years ago, Graham has discovered, surveyed, mapped, or documented hundreds of Mayan sites and monuments. His ongoing Corpus project will eventually record every known Mayan inscription and its associated figurative art—a feat of scholarship that has dramatically advanced the decipherment of Mayan hieroglyphics.

Graham is gracious and self-aware enough to know that his lucky life—“a chain of pleasant events”—was made possible by the happy accident of his silver-spooned birth. His father was the youngest son of the Duke of Montrose; his grandmother on his mother’s side was the proprietress of the arch-Tory Morning Post. Prince Rainier was his childhood playmate; Rudyard Kipling gave him a many-bladed pocketknife just before Graham’s departure for Winchester (“where, of course, it gave me tremendous status in my dorm”). But Graham combined the easy charm born of privilege with an intense interest in the applied sciences, a pursuit rare among the classics-minded aristocracy. At Winchester, at Trinity College Cambridge, and at Trinity College Dublin, he studied electronics, physics, and crystallography; he conducted radar research for the Fleet Air Arm during the Second World War, and after the war he worked for the conservation laboratory of Britain’s National Gallery.

But in the middle of his fourth decade, Graham—unemployed and having abandoned one career (physics) and making little headway in another (photography)—was in some danger of lapsing into the life of an endearing wastrel. Instead, on that first trip to Mexico he became enraptured by an ancient and intensely foreign culture, and in dedicating his life to studying it and preserving its remnants, he discovered that he had a remarkable capacity for sustained and—jungle adventures notwithstanding—often unglamorous work. He was paid nothing for much of that early work (the little money he made, he earned by traveling the world photographing exotic places for coffee-table books), and even when he was an established archaeologist, his life was in some ways mean and insecure. Having no formal academic training in archaeology or the study of the Maya, Graham never held a faculty appointment; his explorations and even his great Corpus project largely depended on the kindness of patrons, including rich widows whom, of course, he captivated. Graham’s fund-raising efforts redounded to the benefit of scholarship but hardly of himself, which meant that throughout his phenomenal archaeological career, this never-married (though energetically heterosexual) scholar-gypsy led something of an ascetic life. When not a guest in a posh house, he divided his time between snake-infested rainforest encampments, his basement office at the Peabody Museum, and grotty digs he rented from the singularly ungenerous Harvard housing service.

In addition to his elegantly written, exquisitely illustrated scholarly books and reports, Graham is the author of the deeply researched, exceptionally vivid and lively biography of the pioneering archaeologist of the Maya, Alfred Maudsley—so it’s not surprising that this handsome (if, owing to its large size and extra-heavy stock, somewhat unwieldy) volume is a work of great élan and literary merit. It is also, if inadvertently, a deeply moving account of one man’s redemption. Archaeology magazine has rightly declared: “Ian Graham has done more than any other person to save the fragile written record of the ancient Maya.” Graham’s story makes clear that the Maya saved him as well.

ÇATALHÖYÜK, AN ARCHAEOLOGICAL site in south-central Turkey, is the largest and most significant—and perhaps the most bewildering— Neolithic 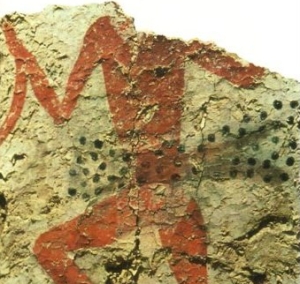 settlement yet discovered. A community that flourished between 8,000 and 9,400 years ago, Çatalhöyük (pronounced Cha-tal–hoo-yook) had a population of as many as 8,000 people, who built, and incessantly rebuilt, their mud-brick houses (the settlement seems entirely made up of domestic buildings) in a honeycomb-like cluster. That cluster was so dense that it left no room for streets or even pathways between the houses—residents entered through the roofs, effectively making the rooftops of the settlement its streets.

The inhabitants decorated their interior walls with plaster reliefs and with elaborate murals depicting wild animals (many of them leopards) and such cheery scenes as vultures swooping down on headless people. They regularly—annually or even monthly—replastered their walls and floors, covering these bizarre and beautiful murals and creating a blank canvas for new pictures. This continual replastering, a practice that from a modern perspective seems compulsive or even ritualized, resulted in a mille-feuille of plaster and paintings and has given archaeologists a precise and crowded chronological record. The houses also functioned as cemeteries, since the people of Çatalhöyük buried their dead—some cradling plaster-covered skulls—beneath their houses’ floors, hearths, and platforms.

The site was uncovered in 1958, but excavations were suspended in 1965; in 1993, the British archaeologist Ian Hodder (long at Cambridge, now at Stanford) began his work at Çatalhöyük. His excavation has been so painstaking (all those layers of murals) that only a small fraction of the site has been uncovered; “thousands of buildings are still hidden beneath the soil,” Hodder wrote in 2006, and since then, only a very few additional buildings have been unearthed.

This book, a masterpiece of archaeological literature, was first published in 2006 and is now available in a more accessibly priced paperback edition. Although Hodder and his team have written specialized articles and volumes of technical reports on Çatalhöyük, The Leopard’s Tale is Hodder’s first interpretive synthesis of his work, and so he wrote it for both an academic and a nonacademic readership. His publisher, an art-book house, has made a specialty of such crossover archaeological scholarship, including the elegant and pathbreaking books of the classical art historian John Boardman; this is (no surprise) a superbly designed and illustrated volume.

In his adept merger of theory and data, Hodder carefully distinguishes between fact and interpretation, and although his conclusions are highly tentative, his work supports the emerging consensus that agriculture and permanent communities—even cities—were not nearly as closely linked as prehistorians once believed, and that in fact complex settled life significantly predated agriculture. Hodder’s work, though, is most fascinating when it is most speculative, especially when he is conjecturing about the psychology and spiritual life of Çatalhöyük’s inhabitants. Here he points to the absence of arable land around ancient Çatalhöyük (it was an insect-infested marshland) to suggest that its occupants settled there less for reasons of subsistence than for proximity to dense clays that were needed to … make all that plaster. Religion and its artistic expression, Hodder suggests, trumped mere economics.

Although he is probably the most influential archaeologist of his generation, Hodder is certainly no stylist; while he usually writes clearly enough, he too often lapses into the passive-voiced, jargony sentences characteristic of the social sciences. Nevertheless, this is a richly absorbing examination of an intensely alien world.