MARGARET THATCHER
The Authorized Biography — Herself Alone
By Charles Moore

Her party still genuflects to her, and a core within it — aging members of the Conservative associations in the shires and no-longer-young fogies in Westminster — reflexively venerates her. In the bleak cities and the former pit villages of the north, the veterans of bitter labor struggles to save now-vanished industries habitually curse her, perhaps along with the party named for them that forsook them long ago. In the London of Cool Britannia’s tastemakers, loathing for her remains hot. She has always aroused a quasi-aesthetic repulsion within the metropolitan class; and, indeed, it is that continued detestation of what Jonathan Miller in the 1980s sneeringly called “her odious suburban gentility” that most potently keeps her memory alive.

But Margaret Thatcher is far too consequential to be retired as a plaster saint or to stand in for the creative destruction of global capitalism or to serve as the touchstone by which the bien-pensants establish their bona fides. It’s time that history claimed her. With “Margaret Thatcher: The Authorized Biography — Herself Alone,” the third and concluding volume of Charles Moore’s 2,700-page work, the Iron Lady can begin to be assessed as a fully rounded personality and a historical fact.

With ethical and scholarly discipline, Moore, a political columnist of a decidedly right-wing cast for The Daily Telegraph and The Spectator (and formerly the editor of both conservative publications, as well as The Sunday Telegraph), has produced a scrupulously evenhanded work. His use of evidence, absorbed from vast archival sources and hundreds of interviews, is punctilious, his judgments measured, his wit dry and sympathetic, his prose classically balanced. This sonorous, authoritative biography makes no empty claim to definitiveness. But it is a work for the ages: It will be the font from which every serious appraisal of Thatcher and Thatcher’s Britain draws.

Covering the period from Thatcher’s third general election victory in 1987 to her death in 2013, this book considers in detail scores of topics and events. While some are merely ancient current events, others are still very much with us, such as Thatcher’s growing anxiety over the impact that movement toward European integration would have on Britain’s sovereignty, an issue that split her party and cabinet and occasioned her downfall. (Moore easily demonstrates that Thatcher’s Euroskepticism, which intensified when she was out of office with the ratification of the Maastricht Treaty of 1992, was instrumental in galvanizing the political forces that pushed for Brexit.) 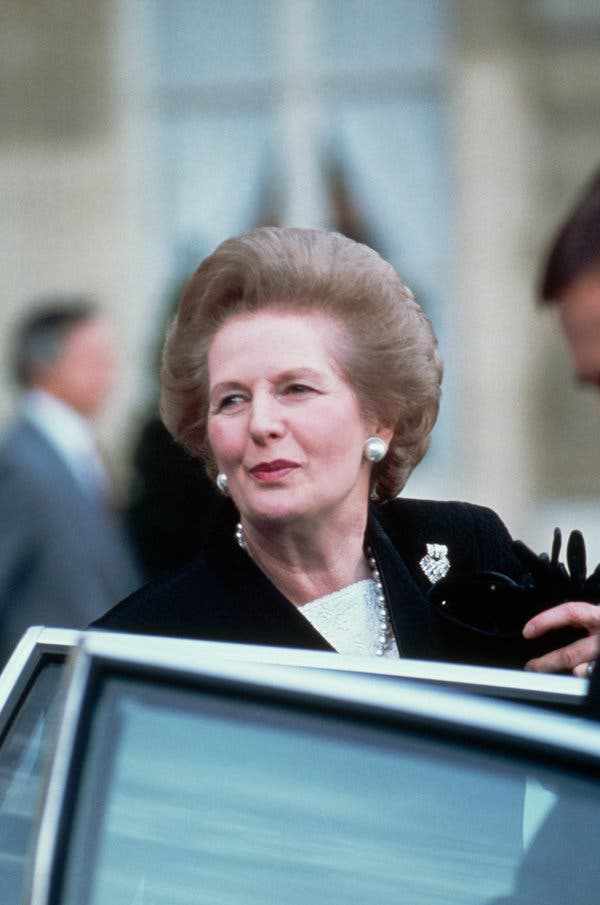 Given the comprehensive approach Moore’s writ demands, this volume, like its predecessors, suffers something of a forest-for-the-trees problem. But Moore’s perspective shifts continually from Thatcher herself (he adeptly captures the force of personality that radiates from her annotations and even from the underlinings in policy papers and memoranda) to her advisers, her colleagues and rivals in the cabinet, her adversaries across the floor in the House of Commons and in Brussels, even her hairdresser. Only this cumulative approach can convey the interplay of Thatcher’s personality and outlook on history and the peculiar way she conducted politics.

Moore leaves no doubt that Thatcher herself ensured that the inevitable clash with the Europhiles in her cabinet and party would end in her downfall, and that, generally, she was her own worst enemy — but for reasons that enhance her stature even as they diminished her effectiveness. No words were more often thrown back in Thatcher’s face than her admittedly, and most uncharacteristically, disingenuous injunction, delivered in 1979, as she entered 10 Downing Street for the first time as prime minister: “Where there is discord, may we bring harmony.” No aspiration was more alien to her.

Clearly, the specific ends Thatcher sought — which included nothing less than the final destruction of what was known as “the postwar settlement” that had defined Britain’s politics and economy for 35 years — could not be realized without contention. More fundamentally, Thatcher thought that any goal worth pursuing and any policy worth enacting demanded contention. Every session of Commons, every summit, every press interview — and, crucially for her political fortunes, every meeting with what were supposed to be her colleagues in the cabinet — was combat. Thatcher didn’t seek consensus. She sought to win. Her guilelessly antagonistic style ran the somewhat narrow spectrum from what Moore nicely characterizes as “bossy headmistress” to the icily forensic.

Most men (she dealt almost exclusively with men) bridled at receiving such treatment from a woman. When she convened a seminar on climate change, Moore notes, “her ministers were grumpy at having to spend so much time in her company,” especially given her “strict instructions to be quiet and listen to the experts.” By the time she lost her leadership, most colleagues were “understandably sick to death of her.” (In contrast, the Labour Party politicians Shirley Williams and Barbara Castle — the latter, Moore rightly judges, “after Mrs. Thatcher, the most important woman politician in British history” — admired and were fond of Thatcher, even while abhorring her policies.)

But to caricature Thatcher as either a hectoring virago or as a latter-day Boudicca is not just to indulge in lazy sexism; it contorts her psychology, her history and her approach to politics. A philistine who used ideas solely to pursue her practical and above all moral purposes, Thatcher was the antithesis of an intellectual: “I am not by nature either introspective or retrospective,” she declared. But she lived to argue. Indeed, to her politics was argument.

Thatcher was proud to be the only trained scientist ever to be prime minister, and she believed in the value of evidence. (Of the Strategic Defense Initiative, she explained to Ronald Reagan: “I’m a chemist. I know it won’t work.”) A provincial grocer’s daughter whose slogging won her a place at Oxford to read for a B.S. in chemistry (the future Nobel laureate, Dorothy Hodgkin, was her supervisor), a post as a research chemist, and admission to the bar, Thatcher as prime minister nightly digested, annotated, queried and responded to all the papers — and all their accompanying tables and appendixes — in her dispatch boxes. Because she surely worked harder and slept fewer hours than any prime minister in British history, she regularly knew more about her ministers’ departmental briefs and policies — and the positions of her fellow heads of government — than they did. Convinced by her severely upright Methodist father that “integrity mattered above all else, and it was important to hold opinions because they were right” (as the historian David Cannadine puts it), Thatcher was, as Moore discerningly notes, an “eager seeker after truth.” 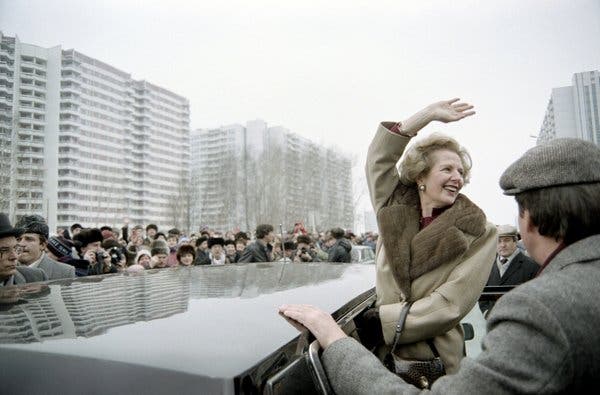 This quality, uncommon in a politician, hardly guarantees that its holder will reach the desired destination, but it made Thatcher at once ruthless and earnest to an almost unworldly degree. (Roy Jenkins, the cosmopolitan British statesman, observed with horrified wonder that she was “almost totally impervious to how much she offends other people.”) Pairing this puritanical approach to politics with a devotion to the adversarial method that her training as a barrister had inculcated (Lord Justice of Appeal Frederick Lawton, who taught her, judged her “the best pupil I had ever had”), Thatcher, who relished the cockpit of the House of Commons as much as she was repelled by the consensual processes that cabinet government ultimately demanded, saw politics as an exercise in advocacy, in which the truth would emerge from the clash of ideas and policies. Her duty was to push for the truth as she saw it; let others do the same.

At its best that adversarial approach bestowed on Thatcher an intellectual integrity, as her implacable ideological foes, the far-left Labour M.P.s Tony Benn and Eric Heffer (who was also her friend), appreciated. That integrity could make her strikingly open-minded as well. She was fond of convening academic experts with whom she disagreed and peppering them with her well-prepared questions and counterarguments. Because she didn’t seek compromise, her mind could be changed. Although Thatcher had subjected Mikhail Gorbachev to prolonged cross-examination upon first meeting him in 1984, and although his response led to heated and prolonged debate between them, that encounter concluded with her famously declaring that “we can do business together.” Thatcher’s recognition of a sea change in Soviet policy and her advocacy of Gorbachev — in the teeth of initially strenuous American objections — are in retrospect the decisive steps in ending the Cold War.

Similarly, owing to her ability to dissect and absorb an enormous quantity of original scientific research, Thatcher was one of the first global leaders (if not the first) to recognize and warn against the dangers of climate change. She aggressively promoted research, was instrumental in starting the first world environmental fund (overseen by the United Nations) and, despite American opposition, pushed for both an international levy on fuel prices and for Britain to set its own emissions targets.

At its worst, however, Thatcher’s adversarial approach to politics made her seem adamantine and unfeeling, which created enmity among a meaningful portion of the industrial working class. This accelerated the collapse of the once-remarkable moral unity that had characterized the British nation in the postwar years — an outcome that Thatcher, whose political project aimed at the restoration of traditional values, should have sedulously avoided.

Moreover, the demonization of Thatcher — a process she made all too easy — was both a symptom and a cause of the infantilization of the left, as it blamed deindustrialization on the malign “Maggie” rather than on profound changes in the world economy. This rendered the left unable to grasp the import of that transformation, and incapable of and uninterested in helping the working class to create an effective political program to cope with it.

Moore probably sees Thatcher’s relationship with the left differently. As a polemicist, he will, appropriately, deploy the Thatcher he has illuminated for his own purposes. Others will draw very different conclusions from the same evidence. Surely that is no matter to him. With this masterpiece, Moore has given us Margaret Thatcher. She now belongs to history.