The Dark Valley: A Panorama of the 1930s, by Piers Brendon (Knopf) 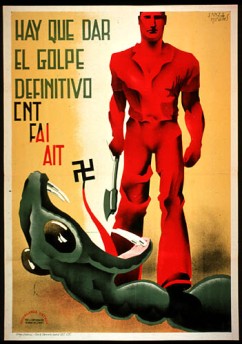 For better and worse, The Dark Valley is, as its subtitle promises, panoramic. In a gigantic (832 pages), sweeping history of the Great Powers in the grip of the Great Depression, Piers Brendon depicts, among dozens of other dramas, the Bonus March on Washington, the Concorde riot in Paris, Barcelona in paroxysms of revolutionary ardor, Moscow in the dull terror of the show trials, and post-Anschluss Vienna in anti-Semitic ecstasy. His astute pen portraits include all the main dramatis personae — Stalin, Roosevelt, Hitler, Mussolini, Blum, Chamberlain — and also dozens of secondary characters, among them the doomed Nikolai Bukharin and Britain’s “Iron Chancellor” of the Exchequer Sir Philip Snowden, who supposedly coined the term “the idle rich.” Although the book’s subject — “a low, dishonest decade,” in Auden’s phrase — is unrelievedly depressing, The Dark Valley is almost always gripping and often very funny. But it is unwieldy and uneven. Brendon arranges his impressionistic chronicle in chapters dealing with the individual Great Powers, so the relationships, chronological and otherwise, among events in the different countries can be difficult to discern. The Dark Valley‘s accounts of the terror famine in the Ukraine and the Nazis’ book burnings are harrowing and exact, but only a careful reader will recognize that these two horrors were occurring simultaneously, along with Franklin Roosevelt’s hundred-day flurry of New Deal legislation. Surprisingly, for a British historian who has previously written exclusively about Englishmen and Americans, Brendon’s most trenchant and vivid accounts are of events and settings outside his field of expertise — Bukharin’s trial and the decadent cosmopolitanism of Shanghai, for example. His depiction of the United States is a rehash of histories of the New Deal and American popular culture. And his account of Britain’s appeasement policy is simplistic: Brendon, who also serves as the keeper of the Churchill archives, divides the actors in that drama into craven fools on one side and Churchill, the omniscient and indomitable hero, on the other. In doing so he virtually ignores the past thirty years of scholarship on this subject — which, while not exonerating the appeasers, reminds us of the terrible quandary facing statesmen in London as they sought to protect Britain’s far-flung global interests (threatened by three aggressors in three theaters) with extremely limited financial and military means. Still, although Brendon’s history sometimes lacks nuance and focus, he paints his panorama with verve and authority. A generation that has never heard of Joachim von Ribbentrop, let alone Pierre Laval (Time‘s 1931 Man of the Year!), and that was told that Newt Gingrich’s “Republican revolution” was a truly world-historical event, could find few better renditions of a decade when all the great questions had yet to be settled.