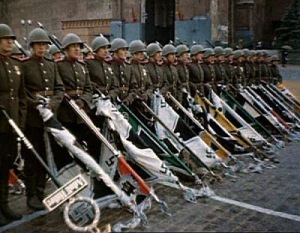 This ambitious history of the final 10 months of Hitler’s Germany examines how, in the face of the annihilating Red Army onslaught from the east and the ever more destructive Allied bombing from the sky, German society remained cohesive, and the Nazi regime continued to function at a high level of efficiency, securing the participation of soldiers and civilians in its hopeless struggle. The author is not primarily concerned with chronicling military events, but rather with assessing the structure and character of Nazi rule and the ways it impinged on the German state and society during this prolonged collapse. Here Kershaw, who wrote what will long remain the authoritative biography of Hitler, has returned to his earlier work on the Nazi period, in which he assessed popular opinion and the mentalities of the party members.

Kershaw knows that Germany’s ghastly and obdurate resistance in the face of inevitable defeat (half of all German military deaths occurred in the final 10 months of fighting) can’t be simply explained, and he’s at his best when elucidating a range of reinforcing and conflicting factors—from the regime’s continued ability to intimidate the populace to the regime’s lingering popularity; from the people’s compliance rooted in the inertia engendered by the struggle for daily survival to the ingrained sense of duty and purpose that characterized Germany’s remarkably capable cadre of civil servants (the mechanisms of the state continued to function until the bitter end). Kershaw is somewhat less convincing, and a good deal less vivid and precise, when his explanations become more theoretical, as when he writes of “charismatic rule.” This work exhibits its author’s deep knowledge of his subject, but it ultimately fails to cohere, and although it is a summa of Kershaw’s engagement with the Nazi period (he’s made clear that as a scholar he’s now through with the Nazis), it has a regrettably rushed quality, at both a structural and a sentence level—a single page, for example, yields the twin, breathless, and clashing clichés of “news … started to spread like wildfire” and “the shock waves rippled.” This valuable and stimulating work of scholarship is something of a missed opportunity.