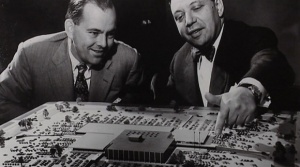 This richly illustrated, intelligently written book probes the history, design, and influence of a ubiquitous but overlooked feature of modern life: the parking lot. Perhaps the most regularly used of public outdoor spaces, parking lots cover more than a third of the land area of some American cities, and at least 1,713 square miles are dedicated to parking nationally. One-half to three-quarters of the site of a typical one-story commercial building is given over to parking, as is nearly 80 percent of the site of a typical two-story building. The result: Parking lots inkblot urban and suburban downtowns; they front strip malls and big-box stores; and they girdle shopping centers, office buildings, factories, resorts, motels, apartment complexes, and stadiums. They have altered both the land and the temperature. By acting effectively as thermal batteries—storing heat in the daytime and releasing it slowly overnight—they have long helped create domes of higher temperatures in built-up areas. Ben-Joseph, a professor of landscape architecture at MIT, doesn’t decry parking lots, but instead offers design and landscape ideas (mostly plantings) to render this nearly century-old and unavoidable facet of modern life more aesthetically pleasing, socially vibrant, and environmentally sound. Although many of his prescriptions are pie-in-the-sky, his analysis of the extraordinary impact of parking lots on our daily lives is eye-opening. He vividly and precisely shows readers their built environment’s most mundane and common aspect, which has hitherto been hiding in plain sight.